With our “Plate it Forward” series, we are shining a light on the altruistic restaurants and chefs throughout the country who aren’t content with just serving delicious food. They are also committed to giving back to their communities in extraordinary, unique ways.

We sat down with Mason Wartman, founder of Rosa’s Fresh Pizza to talk about his decision to switch from Wall Street in NYC to S. 11th Street in Philly, and his impactful program feeding the city’s homeless community. 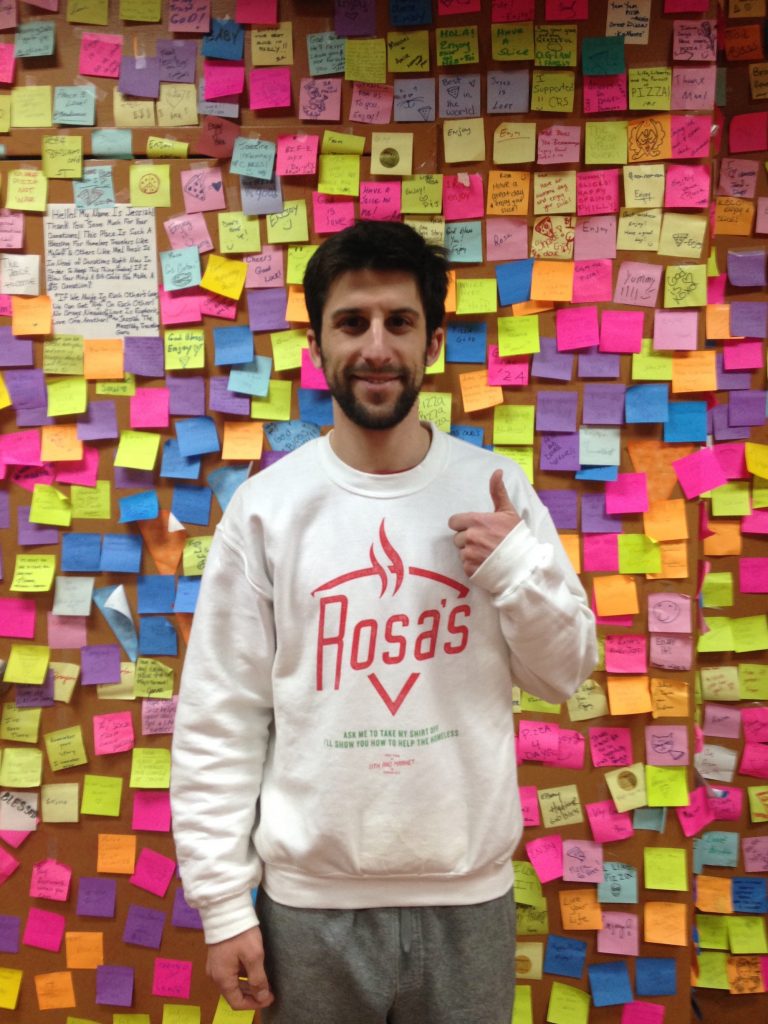 Prior to ever dabbling in the pizza world, Mason worked in finance in New York City. But in 2013, Mason wanted a change of industry and scenery. Inspired by all of the $1 pizza joints lining the city’s streets, he decided to head back to his hometown of Philadelphia to start a pizzeria. And so the story of Rosa’s began.

A few months after opening, an article was written about Rosa’s, its $1 slices and how this affordable food led to many homeless patrons coming in. Soon after, a customer walked in to Rosa’s with an idea. Inspired by the caffè sospeso concept in Italy (when a person pays for a coffee in advance for another person, as an act of kindness), this customer wanted to pay for a slice, for a less fortunate person who possibly couldn’t afford it.

“I thought it was a great idea. I encouraged other customers who came in later to participate…and it was very popular right from the start. People really liked the idea,” Mason said. The pay-it-forward program grew exponentially and transformed into hundreds of sticky notes covering the pizzeria’s walls.

Diners from around the world have heard about the great work being done at Rosa’s and have decided to stop in and slide over $1 for someone less fortunate. “People have come all the way from China. It’s really crazy to see Post-its with Mandarin written on them,” Mason said.

During the winter, Rosa’s also extends its philanthropic endeavors to apparel, boasting a one-for-one model. Every time a customer buys a hat, sweatshirt or pair of gloves, another is donated to a local person in need.

Nearly four years later, 200,000 slices have been given to those less fortunate, all thanks to Rosa’s Fresh Pizza.

Want to give back? Opt-in to Donate the Change, where your Grubhub order is rounded up to the nearest dollar to benefit No Kid Hungry.